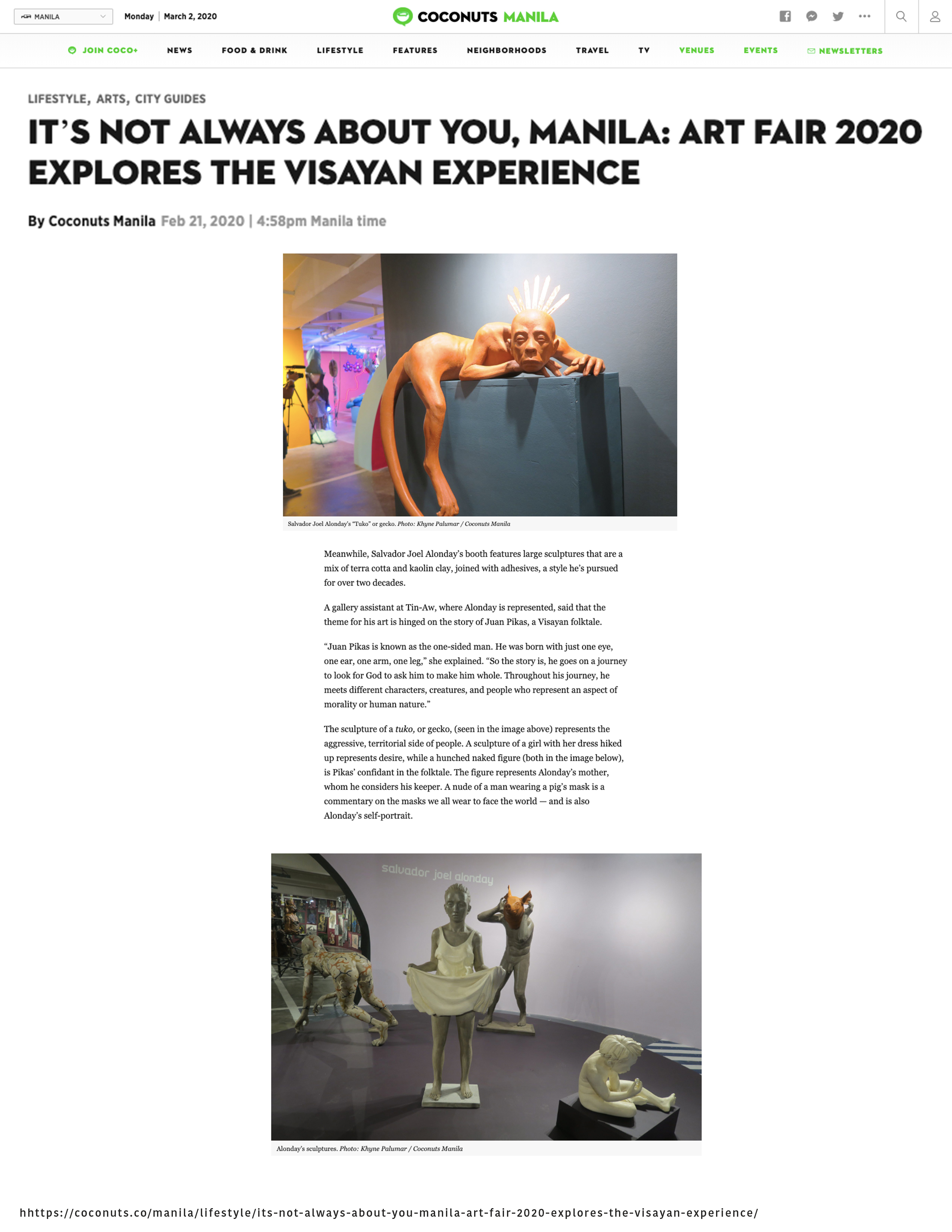 It’s not always about you, Manila: Art Fair 2020 explores the Visayan experience

Images and text by: Coconuts Manila

Art in the Philippines has often been criticized as being overly Manila-centric, but Art Fair 2020 is at the very least seeking to change that by putting Visayan art front and center, starting with “Giatay,” part of its new “incubators” platform, which gives smaller galleries the chance to showcase for free.

“Giatay” is a Cebuano curse word that doesn’t have a direct Filipino or English translation, but functions as a sort of Swiss army knife of curses, conveying anything from “f**k it” to “son of a bitch,” curator Jun Sabayton says in a chat with Coconuts Manila.

With at least 20 artists on display, Giatay is largely comprised of Cebu-based artists. “Most of the artists here are Cebu-based because the city is a melting pot of people coming in from Visayas and Mindanao,” Sabayton said. “Most of [the artists] go to college in Cebu. But several artists also hail from Leyte, Bohol, and Mindanao, which is also Visayan-speaking.”

Sabayton, who also works as a film director and hails from Cebu, said he proposed the space with Cebuano artists in mind, but eventually included artists from other Visayan-speaking regions because they were largely underrepresented in Manila’s art scene. The word “giatay” is meant to represent that rich diversity.

“We use it to express a range of emotion. You can use it to express joy, love, disappointment, frustration, anger — but always in the exclamatory,” Boholano artist Gabi Nazareno said of the word, adding that it has branched out to take on other forms.

“At the same time, to say i-atay is to put someone terminally ill to bed. So when you say ‘Gi-atay na siya,’ that’s the same as saying that [a] person is left for dead,” Nazareno said.

She explains further that “atay” in Filipino also means liver — the reason a bottle of gin sits on a wooden stool between the artists’ paintings, as a kind of inside joke/installation piece representing “gut feelings” (get it?).

Initially, the group wanted to do a political piece.

“Each artist would draw a portrait of Duterte based on their political leanings. So if you liked [Duterte], you’d make a really good portrait of him, and if you didn’t, it will show [your dislike],” Sabayton said.

But the idea was ultimately scrapped because some of the artists preferred to mine self-expressions over politics.

These works includes the work “Amakan ng Ina” (“Your Mother’s Amakan”) by Budoy Marabilies (from the band Junior Kilat), a painting on the traditional woven bamboo panels known as amakan, usually used as window coverings. (The title is also a punny play on the phrase “your mother’s a whore.”)

In another work, artist Lhee Taneo uses seashells (commonly sold as souvenirs in Cebu) that have been painstakingly cleaned and stuck together to form a mosaic image of a child shushing the viewer. One artist suffering from renal failure created a mixed-media piece that mirrors his condition, complete with his prescriptions pasted on the canvas.

Nazareno, for her part, painted a psychedelic image of a disembodied brain called “Banha,” which in Visayan means “noise.”

“It’s about the monkey-mind chatter. So to exercise the negative voices in my head, I put it on canvas,” she said. “It’s not a direct translation, but when your mom shouts ‘banha!,” that’s basically saying ‘shut up’ — to shut out the noise.”

Her personal favorite from the group is a piece by Golda King, which at first glance looks like a collection of tiny rocks, but is actually much more complex.

“So these are things she burned, some of the items she wanted to let go, and mixed it with oil paint and resin. So that used to be a certain item, but now it’s all the same things,” Nazareno said.

Meanwhile, Salvador Joel Alonday’s booth features large sculptures that are a mix of terra cotta and kaolin clay, joined with adhesives, a style he’s pursued for over two decades.

A gallery assistant at Tin-Aw, where Alonday is represented, said that the theme for his art is hinged on the story of Juan Pikas, a Visayan folktale.

“Juan Pikas is known as the one-sided man. He was born with just one eye, one ear, one arm, one leg,” she explained. “So the story is, he goes on a journey to look for God to ask him to make him whole. Throughout his journey, he meets different characters, creatures, and people who represent an aspect of morality or human nature.”

The sculpture of a tuko, or gecko, (seen in the image above) represents the aggressive, territorial side of people. A sculpture of a girl with her dress hiked up represents desire, while a hunched naked figure (both in the image below), is Pikas’ confidant in the folktale. The figure represents Alonday’s mother, whom he considers his keeper. A nude of a man wearing a pig’s mask is a commentary on the masks we all wear to face the world — and is also Alonday’s self-portrait.

Over at the film booth, and continuing with the Visayan-viewpoint thread, are a film triptych, screened across three viewing panels — sometimes showing the same film, and sometimes showing different films simultaneously.

Among the films featured is a Peque Gallaga short shot entirely in Ilonggo in which the conversation is neither dubbed nor subtitled. Viewers can sit in the chairs provided, or kick off their shoes and lounge in the mound of pillows in the middle of the room.

Curator and film archivist Teddy Co explained that Gallaga’s movie is one of the few that was left intentionally untranslated as part of the screening experience, and left for viewers to interpret and take from it what they will.

The roof deck, meanwhile, is where artist talks over the three-day weekend will be held, including a panel discussion by Visayan artists from Cebu, Negros, Iloilo, and Capiz. Aside from discussing the art scene in their respective areas, they will also be talking about a bi-annual Visayan Visual Arts exhbition called Viva Excon.

It’s also a good place to rest your legs and catch some air while knocking back a few beers or having a smoke break before wading back into the expansive five-level art experience. The fair is open 11 hours a day, and you’re definitely going to need it, so it doesn’t hurt to show up early.

Indeed, there’s plenty to see, both within the booths and in between, including a large piece by the late Gabriel Barredo from his “Opera” collection. The kinetic artist, who passed away in January, was known for using everyday items — bottle caps, bed springs, coconut husks, refrigerator parts — to cobble together sculptures that actually made you feel things.

The piece on display at the Art Fair was part of a 2016 installation of carnivalesque sculptures featuring skeletons and severed dolls, amputated body parts, screaming angry faces, and a collection of assorted postmodern junk.

Barredo once famously said: “How can you be minimal when everything is still so maximum?”

“There’s too much out there — and so maybe that’s probably why my works are so busy. It is because today’s era is so consuming.”

It would seem that that this year’s Art Fair has taken that maximalist maxim to heart. Now come on down and get busy yourself.