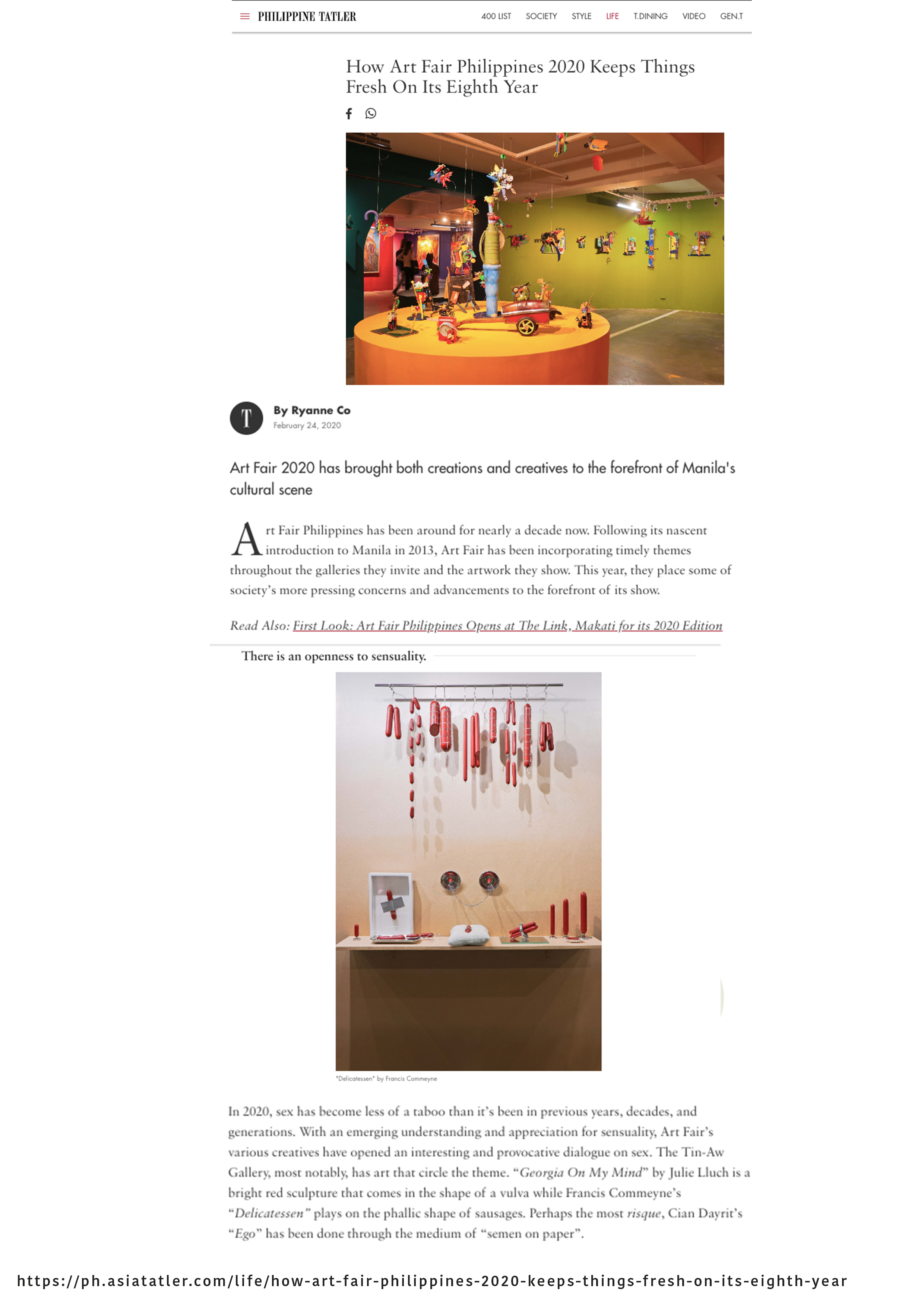 Art Fair 2020 has brought both creations and creatives to the forefront of Manila's cultural scene.
Art Fair Philippines has been around for nearly a decade now. Following its nascent introduction to Manila in 2013, Art Fair has been incorporating timely themes throughout the galleries they invite and the artwork they show. This year, they place some of society’s more pressing concerns and advancements to the forefront of its show.

They place young, local art aficionados alongside international artists and long-time curators.
Young creators and curators are on the rise. One such group is Tarzeer Pictures, headed by a trio of twenty-somethings with a passion for the local art scene. While still relatively young, Tarzeer Pictures places an importance on an artist’s creative freedom, allowing local photographers, painters, and creatives a chance to showcase personal projects. Photographs from young minds such as Dianne Rosario and Cenon at Mav can be seen at Tarzeer Pictures in Art Fair.

They’ve opened up their doors to more creators outside of Manila.
A win for Visayas, Art Fair now includes galleries from cities such as Dumaguete and Cebu. One such gallery is Art N23, which features photographs of fallen trees, captured in Dumaguete (“Disavowed Trees” by Jake Versoza). Contrary to what one might first think it to be, these trees were not felled by calamity, but rather by the hand of man. A stark reminder of the cost of progress, Art N23 poses two different themes in its gallery: hope, for progress, and apathy, for what is lost.

They encourage dialogue on environmental concerns.
It’s been a difficult year, no, decade, for our dear Mother Earth. January 2020 had brought devastation, most notably in the form of the Australian bushfires and the Taal Volcano eruption. This Art Fair, environmental concerns are at the forefront of a few notable works including Poklong Andaning’s “A calm in the middle of the storm”. Co-presented by Julius Baer, Andaning’s artwork explores themes of transformation, capitalism, and environmentalism. The artist had asked various people to place a plastic bag over their heads; placed side by side, the work shows a stark image that depicts humanity’s dependence on plastic. After the photograph was taken, Andaning gave each participant an eco-friendly tote bag in exchange.
Rodel Tapaya’s “Water, water everywhere, not a drop to drink” speaks of the dwindling supply of freshwater in impoverished areas, set against a backdrop of Visayan myth and folklore. Visayans tell of the story of Sadaya’s cave, a cavernous salt mine which contaminates the world’s oceans and seas, transforming freshwater into saltwater.

Their dialogue extends to current affairs.
Although the term “rape culture” was first coined in the 1970’s, the conversation has only recently gained traction in the Philippines. For Art Fair 2020, 1335 Mabini brought over Nikki Luna’s piece entitled “Look At Her”, which is a full-length mirror with the words “As Long As There Are Many Beautiful Women There Will Be More Rape Cases” embossed. The mirror itself subjects the looker to how oppressive certain cultures and views can feel like for millions of women and is both an interesting social and political commentary.

There is an openness to sensuality.
In 2020, sex has become less of a taboo than it’s been in previous years, decades, and generations. With an emerging understanding and appreciation for sensuality, Art Fair’s various creatives have opened an interesting and provocative dialogue on sex. The Tin-Aw Gallery, most notably, has art that circle the theme. “Georgia On My Mind” by Julie Lluch is a bright red sculpture that comes in the shape of a vulva while Francis Commeyne’s “Delicatessen” plays on the phallic shape of sausages. Perhaps the most risque, Cian Dayrit’s “Ego” has been done through the medium of “semen on paper”.

Pieces have become more inclusive with audience interactivity.
Art has always been a personal medium, but to include the viewer into the process bridges a gap that makes art inclusive. One of the more fun, more hands-on pieces at Art Fair is the unfinished doll conceptualised by Jellyfish Kisses. Avant-garde by nature, artist Anton Belardo, has put several of his doll-like creations and paintings on display. For his unfinished mannequin, viewers are invited to take scraps of cloth, sew it on the machine at the ready nearby, and place it on the mannequin. The final product will be put on display and celebrated as a collaborative piece.

Modern technology has been incorporated into traditional media.
Despite the modernity of Art Fair, much of what can be seen remains to be within the confines of traditional media — paintings, sculptures, photographs. However, this year, Isay Rodriguez has brought along her interactive VR experience. What starts out as a treasure hunt soon turns into a VR experience. Guests are invited to look for stickers hidden all around Art Fair; the booth’s app will allow users to scan these stickers that will show them a 3-D rendering of various plants. Once completed, users can return to the booth and experience Rodriguez’s VR rendering. Entitled “Doon”, the piece is an educational and environmental segment on bees. Guests can see the bees’ mating dance and the hexagonal design of their hive through the headset.